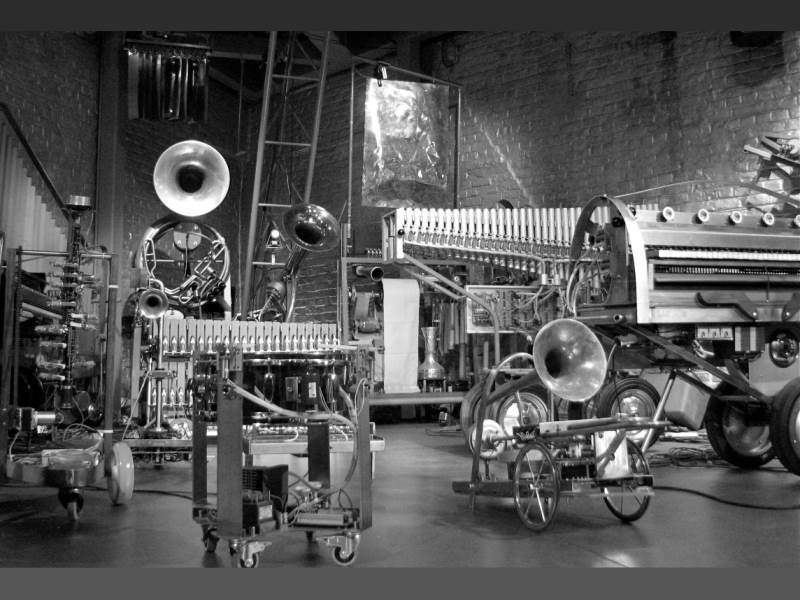 2/2  A nice view on the Logos robots.
(photo: Stichting Logos)

Already quite some time ago I discovered our Belgian mathematician Pierre-François Verhulst (1804 - 1849). This man was fascinated by the growth evolution of populations.That I more or less share this fascination with him, is evident from my earlier work (see Genesis, link below).

In contrast to the widely known Fibonacci series and to the formulas of Quételet, Verhulst took into account a limit which causes growth to slow down when this limit is approached. He introduced a growth parameter that was no longer constant but depended on the remaining free growth space at a certain point in time.

It appears that for some values of this growth parameter the logistic function generates a repetitive flow of numbers which is very attractive for controlling musical parameters with. Our human hearing and perception are very sensitive to repetitive patterns.

A previously performed sonification (see accompanying video) in which all numbers resulting from that formula are converted into audible frequencies (100 Hz - 8kHz). Very clearly audible are the patterns that occur in the course of the A parameter.

In the repetitive patterns produced, Verhulst's logistic formula causes small defects at unexpected moments which break these patterns and disturb them, but further down the line we see that this pattern recovers itself. Extremely interesting of course.

Robots do the work

With Logos we are not dealing with a synthesizer which produces the desired frequency, but with the Logos robots which receive a signal from the computer via MIDI telling them which note should sound. Apart from the choice of the note, the Verhulst formula also takes care of the choice of the robot.

'Kreatie' was the theme of the M&M concert on October 15, 2009 in the Logostetrahedron in Ghent. This creation was an assignment of Logos and was programmed in this concert. The musical notes were calculated live with the Laptop and sent to almost all available music machines at the time of the performance. The software used was developed in Max/MSP.